Sunday, April 21 – Everyone seemed to have slept restlessly, but it was nice to have the long rest anyway. At breakfast Jim negotiated his meal, I was next & just asked for a small variation – everyone else said “I’ll have what she’s having”. It turned out great and we all really enjoyed the meal and the jam – not sure if it was guava, pineapple or something else. Then it was a bit of a scramble to get all our belongings back into the suitcases – they looked like they had exploded all over the room! We crammed into 2 taxi-vans and drove through Santiago to the bus station. It’s like most areas of the Caribbean we’ve seen and lots of horn-blowing. The bus station is busy but orderly. 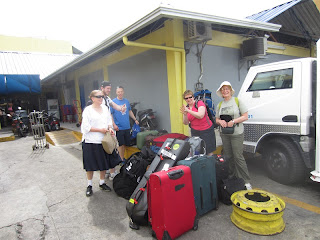 Cal & Jim made all our travel arrangements and then we settled into the A/C waiting room for the 2-hour wait. We’d been warned that it’d be a 4-hour drive with only a stop at the border, so we needed to be prepared. The bus is very comfortable and we got to see the countryside. Before we pulled out of the station we were each given a bottle of water and a hot meal. After about 2 hours, the bus hostess handed back our passports, which she had collected at the bus station. We filed out of the bus at the DR exit point and she collected them again at the wicket. When we stopped at Haitian Immigration we all filed in, filled in a standard form, had our passports stamped and returned to the bus. We had heard there was a great contrast at the border, but it looks much the same – rice paddies, little houses of different types, lots of some kind of fruit trees, bananas. The road is good, but much narrower. At both border stops, kids were waiting with hands out. They were well-dressed and quite orderly, with quick smiles. Some people gave them the leftovers from their lunches. I held onto mine for later. Driving through Cap Haitien we could see the ocean to one side and the crowded busy city all around. At the terminal it was only moments before Pastor Tony Paul arrived with a large truck, fitted out with benches in the back. We heaved all our luggage on, climbed aboard and off we went, feeling like a bunch of giddy teenagers. We had a birds’-eye view of everything as we retraced our path through C.H. Suddenly, a grinning young boy hopped onto the back. We passed him our one remaining dinner. He grinned even more. After a couple of mouthfuls he gave up on the fork, tossed it overboard and dug in with his hands. When he finished he hopped down to the street again. When we turned onto Plaine de Nord street, we had to plow through a large crowd of people, but they let us through easily. We were soon spotted  by a couple of young kids who ran along beside shouting “Blancs, blancs” and waving and smiling. Pastor Paul’s guest house is quite lovely, set on large grounds. WE have spacious rooms. The young guys were quickly drawn into a basketball game. Soon the Pastor sang “All is ready…” and we joined him at the dinner table for a delicious spaghetti dinner served by his lovely wife Mary. Over dinner the Pastor shared some of his story, which Cal plans to record and share later this week. A short walk, an evening debriefing, a prayer, and we were ready to retire. 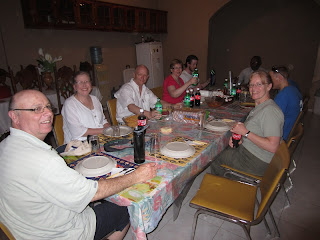